I want to personally thank everyone who came out to the Benefit Concert for the Make-A-Wish foundation last week.

I’ve been thinking about the process of getting ready for a concert and everything that went into making this event happen.

I knew immediately I couldn’t plan anything until we had a venue. So my family and I brainstormed a list of twenty places or so to call. I began making calls with little luck. In fact I actually called the final venue early on but no one answered. Persistence paid off, though. I stopped by after school and found the information I was looking for. I called again a few days later and set up an appointment with the person in charge of scheduling and renting out the building. I received word later that night that they were willing to donate their space for a few hours! (Thank you Dansante!) It just goes to show how much power there is in reaching out and networking! 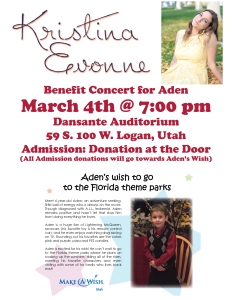 I didn’t have much time for promotion by the time the venue was confirmed. I called the local radio station, set up a Facebook event, tweeted, instagrammed, sent many emails, posted a few posters around the town, and submitted the event to various community calendars.

Every little piece of promotion from boosting the event on Facebook to talking to people helped immensely! If I did it again, I’d try and give myself more time to promote.

If you want find a way to practice for hours, prepare for a concert. 🙂 I practiced 2-5 hours a day in preparation for the benefit concert. My practice included solo guitar, solo voice, creating a practice space in the studio, and setting up the PA system in our living room.

What’s the biggest thing that I learned? Slow, perfect, practice is the key to doing anything well.

The morning of March 4th arrived and I had a ridiculous amount of energy and nerves running through my body. Luckily it was a half-day at school so I was able to get about four more hours of practicing in before the concert. Five o’clock arrived and my dad packed up the PA system. He had an hour to set up everything. (Let me tell you an hour is not enough time. We were doing sound check fifteen minutes before everything started! Ack!) 7:00 arrived and I heard my friend Alex give the introduction – my introduction!! My hands began to shake and a rush of energy ran through me. I heard my name and walked onto the stage and presented my show. It was incredible to look out into the audience and see people smiling, singing, dancing, and enjoying themselves to my music. That moment made all the hours of hard work worth it.

After the concert was over (and after doing my dance of joy in the green room) I went out and greeted as many people as I could and thanked them because I was (and am!) truly grateful people came to show their love and support.

7. Plan your next move

Now what do you do once the concert is over? You plan for the next event! For me, that’s blogging, waiting to pick up the physical copy of my album, (hopefully on Monday!) preparing for dance competitions, writing a jingle, arranging covers, and hopefully planning an album release concert.

I hope this helps you understand the process of performing a benefit concert a little bit better.